As if to exemplify that Sidlesham is a progressive village, Trafalgar Day was celebrated, not on the 21st October, but ten days earlier on the 12th October.  As we assembled on the quarterdeck of the Church Hall, David Blackford regaled us on his accordion with sea shanties.  With a slight hiccup in the galley, we had a short cabaret from one of the singers. Some of the ship’s company complied with the option of wearing ‘nautical fancy dress’, and, though not exactly in compliance, Dudley Pound showed that he could still fit into his naval uniform displaying the three rings of his rank as a commander in the Royal Navy.  No weevil-infested ship’s biscuits and limes on this occasion, the crew being served a splendid steak and mushroom pie and vegetables with drinks from the bar.  While this was settling on the stomach and before the sherry trifle, we were entertained with a ‘reduced’ H.M.S. Pinafore by Gilbert and Sullivan. This was performed by the Havant Light Opera, there being a local connection with this troupe through both David Blackford and Mary Cameron.  The plot sped along with the omission of certain songs and choruses and by David reading a précis of the intervening action. Like many a Gilbertian plot, this one too demanded our credulity allowing the man to get his girl in the end.  It pokes fun at class snobbery, political cronyism and the assumption that only beautiful people can do beautiful things.  All this was ably accompanied on the piano by their musical director, Phil Holland. 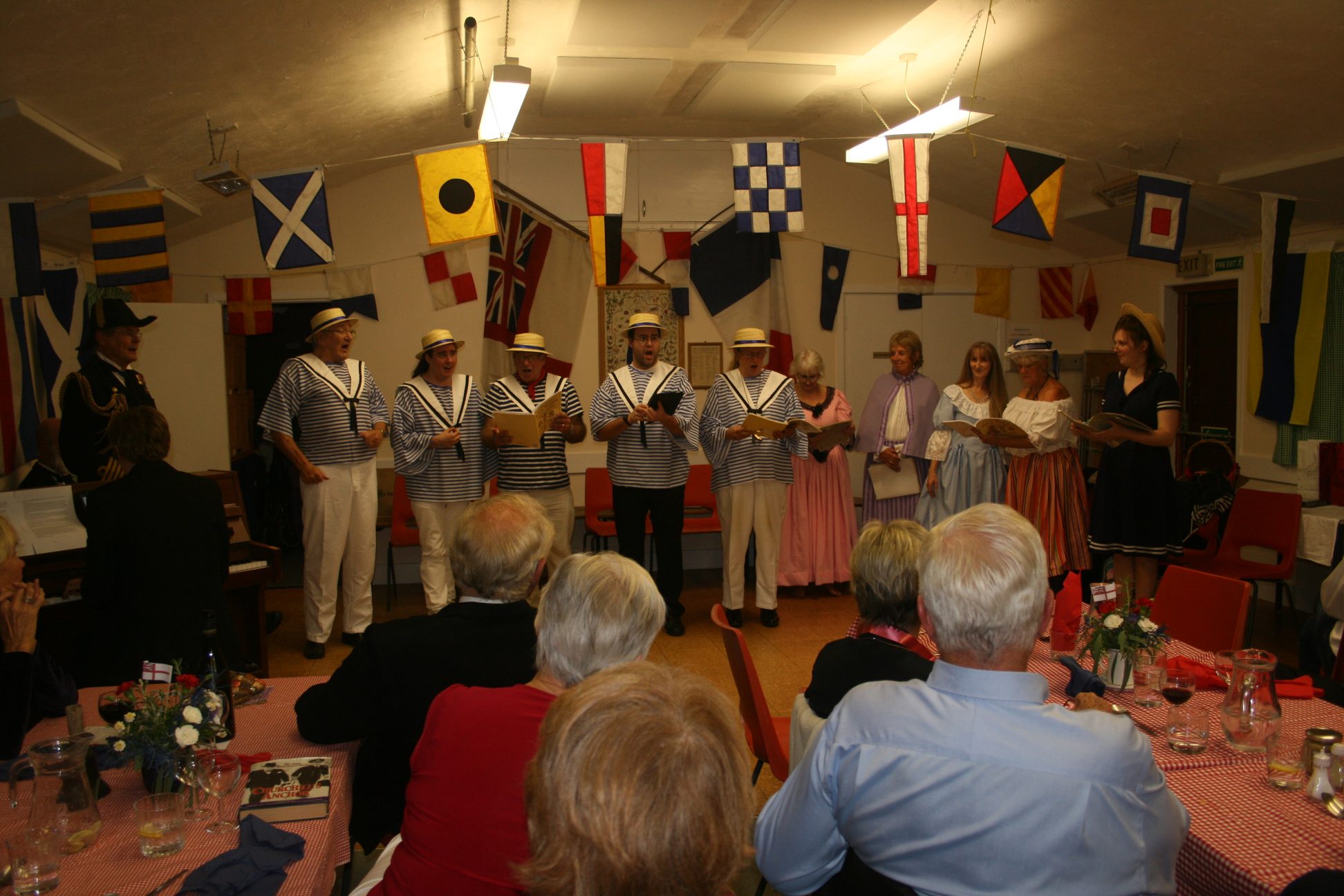 For such a special event we had not one but three toasts – first, the loyal toast, “The Queen”, then one to Admiral Lord Nelson, the hero of Trafalgar, and finally one to Admiral of the Fleet Sir Alfred Dudley Pickman Rogers Pound. We were told by Diana that this First Sea Lord in WW2 had died, perhaps aptly, on Trafalgar Day, 1943.  However, this “ruler of the queen’s navy” had really gone to sea, unlike the Rt. Hon. Sir Joseph Porter in Pinafore.  At the end, we all sang Rule Britannia and Jerusalem each led by a soprano from the cast.

This was truly a community effort organised by the SCA.  The catering was organised by Vivienne Mellodey, Anne Wade, Sandra Ryder Lynda Knowles and Corina Hall.  The chef, who cooked the meat, being Lawrence Hall. Marjorie Ridley helped serve, as did Nicholas and Vanda Hall, with Richard Hall at the bar. Norman and Louisa Robson ran the raffle and David Blackford organised the performers.  The hall was dressed overall with flags collected from villagers within the sailing community, the message being nothing in particular but to enjoy ourselves.  The event advanced the argument that the village could benefit from another hall which would better accommodate not only all the Halls and all their works, but other events and functions too.

By using this site, you agree to our privacy policy which can be found here and to the use of essential cookies for this site to function correctly.

Once you close this message, a cookie will be set in your browser so you shouldn’t see this message again within the next month unless you clear your cookies.